During the early stages of neuroanatomy exploration, scientists were not sure how neurons transmitted their information. Was it all electrical conduction or did chemicals play a role?

Acetylcholine was the first neurotransmitter to be discovered, and proved the validity of the chemical nature of synapses.

Acetylcholine is the name of a neurotransmitter, but the neurons that release acetylcholine are called cholinergic neurons. 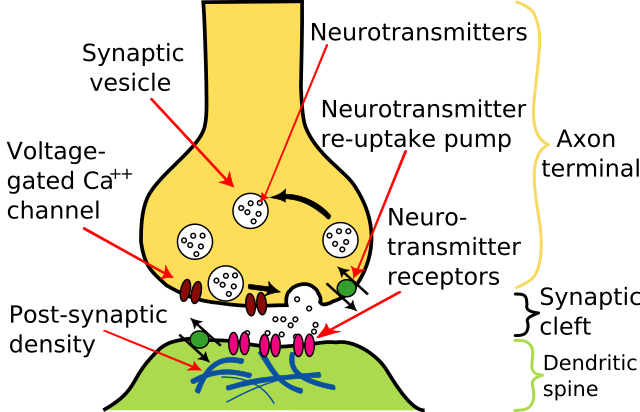 Glutamate is an amino acid that also serves as a neurotransmitter. It is the major excitatory neurotransmiter in the CNS.
There are two major receptors sensitive to glutamate: NMDA receptors (ionotropic) and AMPA (metabotropic) receptors.

The amount of both NMDA and AMPA receptors affect the sensitivity of the cell, and are thought to be directly related to synaptic plasticity and therefore to learning and memory.

NMDA receptors are quite unusual in that they let calcium ions enter the cell. This becomes dangerous when they become overly excited and too much calcium enters the neuron and ends up killing the cell.

ATP (like glutamate) can also serve as an excitatory neurotransmitter. There are both inotropic (P2X) receptors and metabotropic (P2Y) receptors to ATP.

Serotonin is also called 5-hydroxytryptamine (5-HT) and is derived from the amino acid tryptophan.

Serotonin neurons are almost exclusively found in the raphe nucleus, but those neurons have an extremely large range of branches, and are thus involved in many cognitive functions (mood, appetite, sleep, learning and memory).

Norepinephrine and Noradrenaline refer to the exact same neurotransmitter. I find the term noradrenaline to be more descriptive, and is used in most countries.

Neurons that produce noradrenaline are called noradrenergic (but not “norepinephric”… another reason why I prefer noradrenaline).

Norepinephrine is derived from the amino acid tyrosine.

In the brain, noradrenergic neurons are mostly found in the locus ceruleus and in the reticular formation. These neurons also have a very large range of branches and influence many cognitive functions (arousal, decision making, reward, depression, schizophrenia,….).

Just like Norepinephrine, dopamine is also derived from tyrosine.

The reach of dopamine neurons is very extended as well and play a role in reward-learning, schizophrenia, memory, attention, problem-solving, and personality traits.

GABA, (or γ-Aminobutyric acid ) is a derivative of glutamate, but is a major inhibitory neurotransmiter.

There are both ionotropic and metabotropic  receptors to GABA. (GABA receptors and GABA producing neurons are called “GABAergic”).