In your classes about neural development you might have encountered these funny little cells called “the neural crest cells.” 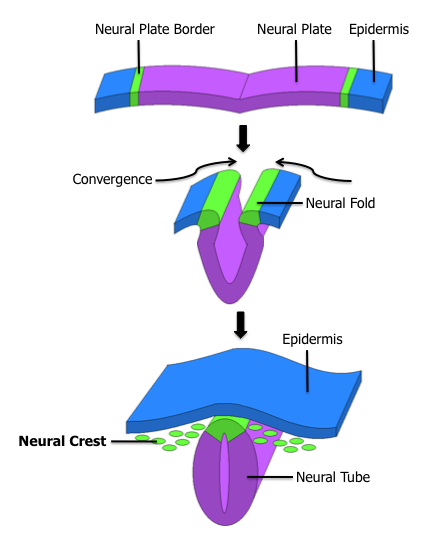 You can first encounter these cells when the neural tube starts folding. As the primary neurulation (closing of the neural tube) finishes,  you have a layer of ectoderm on the “outside,” the closed neural tube “inside,” and between them there is a small layer of cells. These are the neural crest cells.

Some neural crest cells will more or less stay where they are, but many of them are quite avid travelers and they will start migrating all over as soon as they are ready!

And just like for us, it is through their travel, the chemical signals they encounter along the way, and the overall environment that they are in that will influence what career role they will end up with.

Some neural crest cells will slightly migrate laterally and will develop into sensory neurons of the cranial and spinal nerves. (In the developed nervous system, the cell bodies of these neurons are located in the dorsal root ganglia of the spinal cord).

Some of the neural crest cells that are present around those cell bodies in the dorsal root ganglia will develop into satellite cells. Satellite cells provide the neurons with nutritional support. (Read this article if you need a refresher on glial cells).

Some of the neural crest cells that stay in the “top” neural crest layer will develop into motor neurons and “aggregate” into pack of cells, forming sympathetic ganglia (paravertebral ganglia). They will be enclosed by the spinal cord once it starts forming.

Some of the neural crest cells that surround those growing neurons will develop into Schwann cells, and become responsible for building the myelin sheath around the neurons’ axons.

Some neural crest cells will travel around the abdominal aorta while others will migrate farther down into abdominal and pelvic organs.

Another example of possible journey for neural crest cells are those that migrate toward the adrenal gland and become the adrenal medulla.

But Neural Crest cells can develop into so many different kinds of cells:

There is so much to learn from the incredible “multipotentiality” of the neural crest cells!! It makes for very good scientific research, and a real headache for student who have to try and make sense of what happens during development.

Once you get into more advanced neural development classes, you will start learning about all those signals that “pull and push” cells and contribute to their differentiation. I find it incredibly interesting!

I hope you will too.