In a previous article, we covered the basic terminology and nuclei of the thalamus. Today, we are going to look at the projections that synapse onto the thalamus and those that depart from the thalamus!

The anterior nucleus receives afferent projections from the hypothalmus. More specifically from the mammillary bodies of the hypothalamus (through the mammillothalamic tract). It seems to be involved in the processing of memories.

The anterior nucleus then sends projections out to the cingulate gyrus.

The dorsomedial nucleus also receives afferent projections from the hypothalmus and as well as from the prefrontal cortex.

It’s efferents are then sent back to the prefrontal cortex.

It appears that the dorsomedial nucleus is heavily involved in the processing of “personality” characteristics, and more specifically to “personal care.” 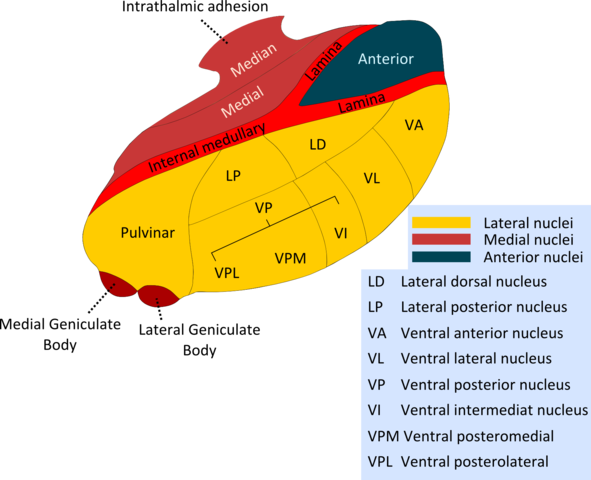 It receives afferents from the occipital cortex (involved in vision processing).
It then sends projections to the parietal cortex.

The ventral anterior nucleus receives afferents from the basal ganglia, and sends axons to the frontal cortex.

It receives afferent projections from the cerebellar nuclei, then sends projections to the motor area of the frontal cortex.

The VPM receives input from the face and olfactory information, and sends information to the part of the parietal cortex associated with the face.

The VPL receives information from the trunk, and sends its efferents to the part of the parietal cortex associated with the trunk.

The medial geniculate body receives afferents from the ear (auditory information) and sends efferents to the primary auditory area of the temporal lobe.

The lateral geniculate body receives its afferent from the retina (visual informations) and sends efferents to the primary visual area.

The internal medullary lamina contains a group of nuclei known as the intralaminar nuclei. They receive afferents from a bunch of places (basal ganglia, prefrontal cortex, midbrain, frontal lobe) and seem to be involved in controlling our levels of consciousness.

The intralaminar nuclei, in turn, send efferent projections to the basal ganglia and to the frontal cortex. Why You Don’t Fall When You Stand: The Myotatic Reflex