7 senses and An Introduction to Sensory Receptors

Now that we’ve introduced the coolest cell in the body, and the army supporting it, let’s start our descent into the nervous system.

Our experience of the world starts with the ability to perceive the world, and to discriminate between different kinds of stimuli. You generally experience the world through your five senses: vision, hearing, smell, taste and touch. Each of these senses require their own type of “perceiving” neurons.

But you also have a (forgotten) 6th sense…

… no, it’s not your intuition or anything metaphysical….

It’s called proprioception: the ability to know where your limbs are in space, without having to look at them.

OK, let’s use the correct vocab here. “Perceiving” neurons are actually a class of neurons on their own properly called Sensory Receptors.

Add to that your 7th sense (man, you never knew you actually had an extra pair of totally real senses), which perceives the internal surfaces of your body, such as your blood vessels and the walls of your viscera. This perception is possible because of interoceptors – a type of sensory receptors.

The Sense of Touch

Your body is covered with skin tissue, which means that your sense of touch is usually a result of your skin contacting a surface.

Sensory Receptors of the Skin 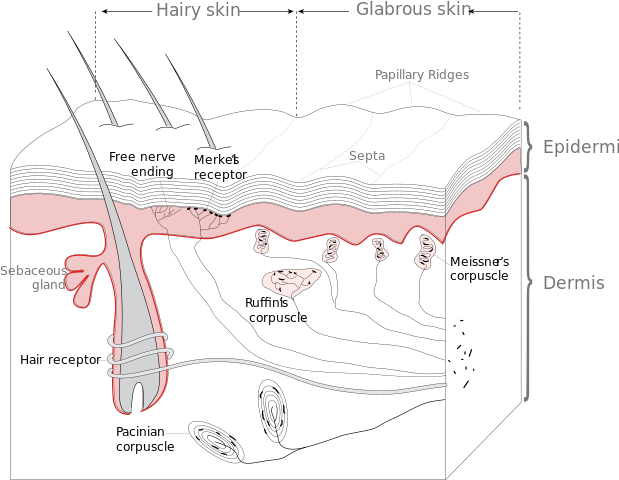 They can perceive pain, touch and temperature. They can be found in the epithelial layer of the skin.

They respond to light pressure. They can be found in the epithelial layer of the skin. They can perceive fine differences in location, a process known as two-point discrimination. (This is what enables people to read Braille with their fingers).

They wrap around hair in the skin and they can perceive when the hair on your body or face is being touched.

They respond to touch and pressure. They are found deeper within the skin, in the subcutaneous layers. They are known to be sensitive to changes in angle, and as such, they also carry a proprioceptive role involved in telling the brain where the fingers are located in space.

They too are involved in two-point discrimination. They are usually found in the “hairless” portions of your skin such as the palm of your hand and your fingers.

They are sensitive to pressure and vibration. It’s the biggest type of nerve ending. In fact it’s so big that it can be seen by the naked eye!! They are characterized by a large, flat laminated “disc.” They are found deeper within the skin (this is the reason why they respond so well to pressure).